Well, here we were again! 12months after my first attempt at this race I was back & itching for another crack at it. Last year I trained for the race totally on the road & was carrying an injury on race day. Still felt like I had to have a go or else I would for ever be asking myself “What if”?

I had made it to 60miles that day before pulling out in too much pain. This year would be different! (Or so I thought)

Standing at the start line, beneath the Parthenon emblazoned in floodlights, I had none of the nervous energy or banter that I had last year. I was calm & quiet, contemplating my journey ahead & just how hard it was going to be! (Or so I thought) 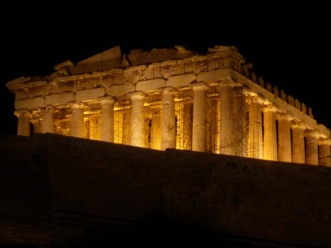 7am & we were off. I started nice & slowly, looking to keep to my plan of 12min miles for the first 15minutes or so before speeding up. This is no way fast enough for the Spartathlon but this starting approach has served me really well for my last few races &”If it ain’t broke, don’t fix it” Down the cobbles we ran & I was bursting for a pee already! The loos were shut & upto 30seconds before the race I hadn’t needed to go, I glanced to the side & saw a few runners nipping off to go so I joined them. Quick pee break & I re-joined the race, but I was quite near the back at this point.

Back to 12min miling & I quickly realised this wasn’t working as I was cramping up by running so slowly. Gradually increasing my speed, I hit a comfortable pace, a little faster than I wanted to go but still manageable.

Onto the pollution saturated roads of Athens, where the police held up the cars at the junctions & the drivers showed their displeasure at this by continually sounding their horns. Don’t know why, we weren’t going to get out of their way any quicker….

The first 10km is all uphill & everybody was moving at a great pace, even a chap just wearing a pair of Speedos! I slowly began working my way through TeamGB, the sun still hadn’t risen properly at this point & we were still in a lot of shadow in places, it was however getting warmer but no way could this race be as hot as it was last year. (Or so I thought)

Hit the 10km mark in 50mins & crested the hill, next 10km is essentially all downhill or flat. Still feeling very strong, I stayed at my slightly faster than planned pace but was already mentally rearranging my walk breaks. At this point I caught up with James Elson & Peter Johnson & had a chat with them for a few minutes before pushing on. I whizzed through the first few CPs & was looking forward to CP 4 where I had the first of my drop bags. A bit of food & some electrolyte drink was just what I needed at that point, having a quick walk break while I ate my cereal bars. Lesson learned from last year, *Move through the CPs as fast as possible* Cracking on I ran comfortably to CP5 where I topped up my water & grabbed a handful of food from the table. I saw Sue there, the girlfriend of another GB Team member Lindley & asked her to text my wife & say that I was going well & felt really good (Or so I thought)

Twenty minutes after this my race started to unravel, I was feeling a little queasy on the road & just before the next CP I was having a walk when Lindley came upto me. We walked together for a couple of minutes & then he said he was going to push on, I was still having a few issues with my stomach & a few seconds after he left me I was at the side of the road throwing up. I took a quick drink of water to wash the taste out of my mouth but threw that up as well. This was the pattern that continued for the next few hours! Every time I took a drink or some food it was coming back up again. This isn’t good in the UK where it’s cool but in the heat of Greece it was the worst thing that could happen!

Keep on moving, that’s the best thing to do in a situation like this, keep moving & take whatever medicines you have to help. The only thing I had was my Endurolytes which have a buffer in them to help settle your stomach so I popped a couple of them, washing them down with a little sip of water. Bad move! Within 30 seconds it was all back up again & I was back to square one. No problem, keep moving & it will get better in an hour or so. (Or so I thought)

Three hours later & I still couldn’t take a drink, was covered in a white layer of salt, was reduced to walking & watching the time cushion I had built up earlier in the race disappear. I was hitting the CPs just after the closing time but I was still being waved through, could this be my lucky day? No, I knew by now that my race was all but over so I rang my wife just to let her know that I fully expected to be pulled at any moment. However I did tell her that the next CP I was due at had a dropbag there & if I could keep the food & drink down then I would try to make up the time.  I went straight through the CP grabbing my bag as I went. Food first & then the drink, I wolfed down my bars & swallowed 600ml of electrolyte solution in seconds. Could this be ok!? No, straight back up again & that was it, game over!

I didn’t want to go back to the last CP so I walked to the next one where I handed my number & chip over. I knew that there must’ve been a massive amount of runners who had DNF’d because they had run out of DNF forms & I had to sign a blank piece of paper.

Boarding the “Death Bus” I saw that I was in good company with Stuart Shipley, Drew Sheffield & Dave Miles already on board! I gave an actual WTF to Dave as we had both crashed out of the race at the same CP last year as well.

Bussed on towards Sparta, we cheered all the British runners we saw along the route & getting a good view of the Mountain that they would all have to run over to complete this race. After the first 50miles which is very industrialised, the remainder of the race apart from the last couple of miles into Sparta is very scenic & looks like a pleasure to run through.

After a night in our hotel we made the trip to the finish line to watch the runners come in, we knew that nearly 80% of the athletes had DNF’d & that the heat had really taken its toll on everybody. We all met up at a bar 150yards from Leonidas’s statue where we waited for news from the remaining British runners. We already knew that Lizzie Hawker had run a storming race finishing in 3rd place & smashing the Women’s record in the process with a stunning time of 27hrs.02mins.27secs

I was in constant contact with Gemma, the girlfriend of a friend of mine James Adams who was still running & when she said he had left CP73 we knew we had an hour to wait. 30minutes later Gemma was with us & we all started straining our eyes down the road. Every time we heard clapping further down, our hearts lifted a little & we cheered & clapped the runner through & onwards towards the finish. After another 15minutes or so I just couldn’t stand there waiting any longer so I said I was going to walk to meet him. Turning the corner & walking up the road I could make out a figure in the distance being slowly shadowed by a bus, hurrying along I recognised the gait of a runner who was in massive amounts of pain but so determined to get to the finish! Yes, it was James, I gave a cheer & ran up to him, shaking his hand & giving him a massive hug. I told him that we were all waiting for him in the bar, he asked if Gemma was there & if she had his flag. Yes & Yes, so he handed me his waist pack, his hat & we set off for the final few hundred yards. Rounding the corner, we saw the others & an almighty cheer went up from all the Brits. Starting to jog, James went straight to Gemma, hugged her & away we went again. All of us following him up towards the finish line & the Statue of Leonidas. I don’t know where he got the strength from but he was flying along at an amazing pace & we were struggling to keep up. He crossed the line to an amazing cacophony of sound & kissed the foot of Leonidas signalling the end of his race.

Sitting in the blazing sun at the bar, drinking beer & talking to the other runners I had convinced myself that I would never be able to tame this race! 153miles in 36hrs!? I couldn’t even get to 32miles this time. This race that had been my passion for years now, I had lived & breathed it & at the moment I just couldn’t see a way of getting through it. (Or so I thought)

Seeing James on that final stretch totally turned me around again. Just watching & being a very, very small part of his finish has relit that Spartathlon fire in my belly. Never tame this race?! Rubbish!  I’m coming back to smash it next year.